As well as the announcement of their new app, ShotHotspot has been recently been updated with a series of new features. As ShotHotspot grows in popularity, it's features continue to grow, with major updates coming almost monthly. If you have any suggestions for new features get in touch. 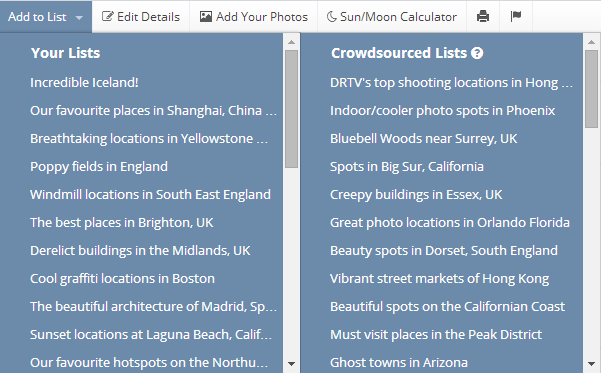 Members of ShotHotspot can create and share Lists of photographic hotspots, nothing new there. But now, they can also mark their Lists as 'crowdsourced', allowing any ShotHotspot member to add hotspots to it.

This should make crowd sourcing photography ideas easier than ever, and has already been put into good use with this list: Map of Deer Parks in the UK 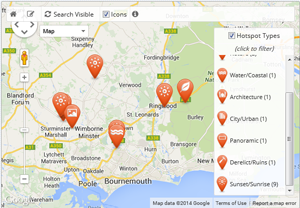 Based on feedback from ShotHotspot users, a new 'Sunset/Sunrise' hotspot type has been added, letting users search for, filter, and tag hotspots by the new type. 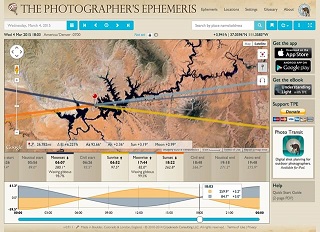 Tighter Integration with The Photographers Ephemeris

The popular light tracking tool The Photographers Ephemeris (TPE) has been recently been re-written for the web. Maintaining it's close partnership and integration with TPE, ShotHotspot has been updated to link to the new version - making planning lighting for that perfect shot even easier. Just click on the new 'Sun/Moon Calculator' buttons to open the hotspot location in TPE.

There have been major improvements for renderering the site on mobile devices, particularly the Add/Edit Hotspot and Add/Edit List pages.

The navigation bar has been completely redesigned, with a permanent search bar and notification area.